Following Turnell’s retirement from DePauw in 1971, WGRE faced a new era without one of its most visible faces from the past two decades. While changes were felt around the station when WGRE’s first advisor Herold Ross retired in 1961, upon Turnell’s retirement WGRE was forced to enter a transition period which would necessitate new leaders coming into the fold. The first of such leaders was John Bittner who was named WGRE’s general manager and faculty advisor at the beginning of the 1973-1974 school year. For the years between Turnell’s retirement and Bittner’s hiring WGRE had general managers, most notably Rick Gudal who had been a 1972 graduate of DePauw, but Bittner represented the first faculty advisor since Turnell retired from the position. 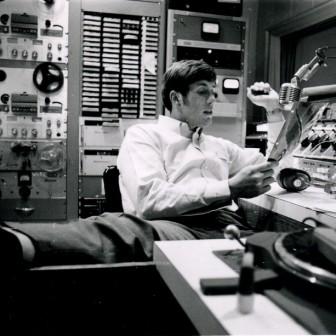 April of 1974 marked a significant milestone for the station and the university as WGRE celebrated its twenty-fifth anniversary of broadcasting and service to the DePauw and Putnam County communities. For this milestone, WGRE was featured in a 1973 article in The Journal of College Radio. At the time of the anniversary, WGRE had approximately fifty students involved in the station and featured a diverse variety of programming. The station was on air eighteen hours six days a week and seven hours on Sunday. During this time WGRE broadcast pop music, educational programs and language labs, syndicated shows and also music that was popular among college students. The WGRE Sports Department also provided broadcasts of all major DePauw sporting events including all football games as well as home basketball games and select baseball games during the spring. With Bittner’s arrival in 1973 a greater focus was placed on broadcast communication curriculum and its role with WGRE. Bittner was frequently published and used WGRE as a means of developing effective communication curriculum. Student involvement grew during Bittner’s tenure, but often a few students tended to become really involved throughout each semester. 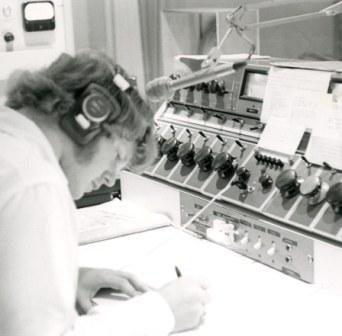 During the 1970s and 1980s WGRE’s programming evolved significantly. News coverage improved when WGRE joined the UPI Audio Network in the fall of 1974, allowing the station to broadcast audio material and provide up to the minute national and world news. The addition of this service allowed the station to broadcast major newsworthy events such as news conferences and Presidential Debates.  Beginning in 1975, WGRE aired the broadcasts of the Metropolitan Opera each week. These broadcasts, which were provided by Texaco, were very popular among the local community. The opera broadcasts fit into the new sound of the station very nicely, especially when WGRE adapted its programming to a stricter musical and fine arts format in the spring of 1977. Within this format, WGRE broadcast twelve hours each day of classical music and some other special programming around the noon hour. In the evenings, WGRE played rock music allowing students to learn the complexities of a contemporary radio station and gain practice as a DJ. Though the format of the station would continue to evolve throughout the 1980s, John Bittner would not remain with DePauw through these changes. Bittner left the university at the conclusion of the 1979-1980 school year and WGRE was once again faced with a change in leadership. 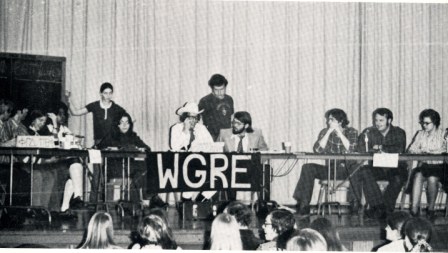 While changes in leadership proved to be one challenge for WGRE, technical difficulties often plagued the station as well. Bob Reeves, a university engineer who also served as WGRE’s Chief Engineer from 1964 and 1991, helped the station and its student staff to meet the challenges of changing technologies and technical difficulties during his time with the university. Reeves often came up with practical solutions to complex technical problems, saving the university money and helping prevent DJ headaches. Because WGRE did not have extensive financial resources, Reeves’ work was essential for keeping the station operating and on the air. For instance, when the FCC changed a rule which required DJs to be able to raise and lower transmitter power, Reeves developed an arm from a motor and an erector set which would allow the DJs to control this from the studio. As a result, Reeves likely saved the station a great deal of money and prevented WGRE from needing to purchase expensive equipment to keep up with changing technologies. Reeves was also quite instrumental when WGRE changed from monophonic to stereophonic sound in the fall of 1983. The change in sound helped the station broadcast a much fuller sound and also increased the station’s power. When this change took place Reeves was able to save the station a considerable amount of money by making the old equipment at the station compatible with the new stereo sound. If not for Reeves’ resourcefulness, WGRE might not have been able to afford to remain a part of campus life. His contributions to WGRE during his twenty-seven years with the DePauw proved invaluable to the station upon its move to the Center for Contemporary Media in 1991 and also helped keep the station viable during times of technological turmoil.

By 1982 WGRE’s format had experienced significant change once again. The station largely abandoned its fine arts programming in search of a more consistent, modern radio sound. Though classical and jazz music was still featured on the airwaves, it played a much less significant role in the station’s programming. Around this time the station switched to a strictly Top-40, rock radio station. Looking to find its niche in the radio market and appeal to students, WGRE featured primarily hard rock beginning in 1984. With these changes the station maintained its eighteen hour broadcast day and kept significant local programming such as DePauw sports, public affairs and news. With direct lines connecting the station to places around campus like Gobin, Blackstock, Meharry, the Library and Bowman Gym, even more on-location broadcasts were possible. A Marti unit which allowed for remote broadcasts anywhere within the city limits was also purchased and used considerably. During this time, largely as a result of the more modern sound, the station could now boast a staff of around eighty students in any given semester. Though most of the participants weren’t significantly involved in day to day operations of the station, a few students emerged as important fixtures of the station’s staff each year. 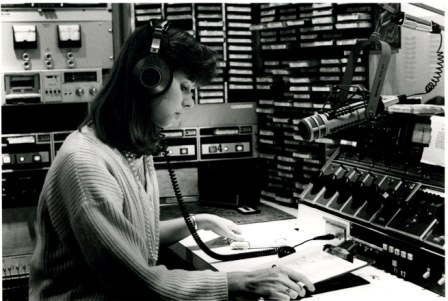 1982 was also memorable for controversy created by the WGRE news department. Upon DePauw graduate Dan Quayle’s election as the Junior Senator from the state of Indiana, DePauw intended to invite Quayle back to the university in order to receive an honorary degree at commencement. In a regular faculty meeting in 1982, however, the faculty voted against giving Quayle the degree because he had not been highly thought-of as a student. When the faculty voted against the honorary degree, University President Richard Rosser stood before the meeting and announced that a degree had already been promised to Quayle, and another vote had to be taken. Ultimately the faculty re-voted and decided to award Quayle with the degree. Two members of the WGRE news team, Jeremy Heiple and Doug Page reported the story on the air later that evening. Though he did not hear the report directly, President Rosser was contacted by Quayle’s press secretary who had heard the story to inquire whether or not Quayle should attend the commencement ceremony in May. This angered Rosser, who contended that the meeting had been “off the record.” Heiple and Page, however, spoke to a faculty member on the record and relayed the story without any direct quotes from Rosser or the rest of the meeting’s discussion. Though Rosser pressured then station manager Ken Owen to suspend and fire the two news people, this did not occur until both committed insubordination by continuing to report on the story after they were asked to cease covering the incident. Another news person, Dave Fehling, also resigned. The University itself did not have a hand in the firings, however.  Owen and Fehling debated the issue of journalistic integrity and ethics on Indianapolis TV station Channel 8’s show, Nightbeat and numerous regional and national news outlets also picked up the story about the controversy. Quayle himself eventually became involved by asking for the dismissed staff members’ reinstatement as reporters. This did not happen, however, and the story became more about journalism ethics rather than the Quayle story itself. Within the next month the reporters had been replaced and the controversy had largely died off. This issue illustrated the challenges for the station, particularly its news department, maintaining editorial independence while also remaining a part of the university. While this was not the last confrontation between the station and the administration over news content, these conflicts have mostly been kept to a minimum. 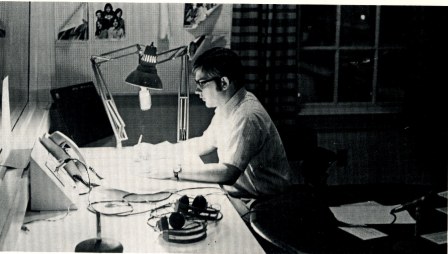 Following John Bittner’s departure from the university in 1980, a variety of faculty members were responsible for WGRE’s operations. It was not until the fall of 1985, however, that a permanent replacement for Bittner was found in Jeff McCall. McCall, who was a DePauw student and WGRE participant from the fall of 1972 until graduation in 1976, sought to maintain the station’s rich tradition while updating many of its now outdated practices. In his first year as faculty advisor a group of students petitioned McCall to make the station a twenty-four hour operation, and McCall consented to this change so long as it was consistent, seven days each week. This automatically increased the number of students who could be involved and met a growing demand amongst the student body for airtime on WGRE. The staff grew to over one hundred and fifty participants during this time. The following fall, in August of 1986, McCall initiated a switch from the UPI to AP wire service. The change improved the news services received by the station and enhanced news broadcasts. By the late 1980s WGRE was petitioning record labels for music that fit the station’s newly minted “alternative” sound and the music collection grew tremendously. The once difficult task of seeking out music to play on air was relieved significantly and for the first time in 1990 WGRE settled on a regular format of “college alternative” music. Needless to say, the end of the 1980s and beginning of the 1990s was much more promising than the early 1970s had been for WGRE. With a new leader fixed at the station and the opening of the Center for Contemporary Media in 1991, WGRE entered a new decade with opportunities seemingly unrivaled by other college radio stations. By 1991 WGRE had become a unique fixture on campus which helped to distinguish DePauw from other liberal arts universities.