With its relocation to brand new Union Building studios in 1951, WGRE emerged as one of the most active organizations on DePauw’s campus. The success of WGRE between 1951 and 1971 is a testament to the hard work and dedication of WGRE’s first Program Director, Elizabeth Turnell. Along with Dr. Herold Ross, Turnell helped keep WGRE on the air and at the forefront of college radio during a period of dramatic changes during our nation’s history. The station’s new studios in the Union Building included numerous studios, a control room and ample storage for WGRE equipment and music. The move from Harrison Hall marked a change in radio as stations were beginning to use smaller spaces with fewer studio audiences for broadcasts. The move to new studios also allowed WGRE to expand programming. 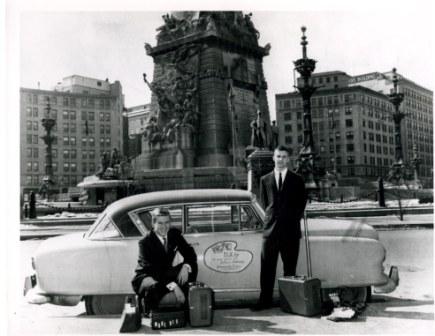 Tom Morgan '63 and Ray Williamson '65
In Indianapolis, Ind. covering the press conference of the inauguration of DePauw University President, William Kerstetter in 1963.

Though the early 1950s found WGRE establishing itself as a campus organization, the latter part of the decade was transformative for the station. The end of the decade brought a number of prominent speakers to campus, including Vice-President Richard M. Nixon in May of 1957 and British Prime Minister Harold MacMillan for Commencement in 1958. WGRE broadcast both speeches, as well as originated a national broadcast of MacMillan’s speech. A transcontinental line was set up at Blackstock Stadium and MacMillan’s speech was heard across the country by way of NBC. 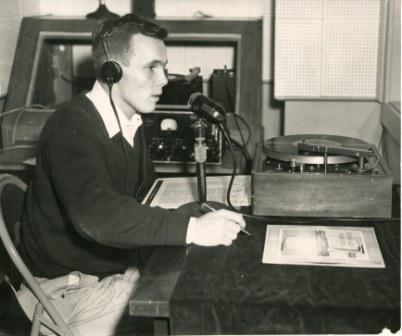 Also in the Spring of 1958, Judith Waller, NBC’s retired director of public affairs and a female radio pioneer, spent time in Greencastle with WGRE students. Her visit was well received by the radio staff members and proved to be a valuable service to the DePauw community. The 1958-1959 school year marked WGRE’s tenth anniversary and also one of the more valuable contributions made by Turnell during her tenure with the DePauw. During the school year, DePauw arranged an exchange program with the Kanayamaya Schools in Hawaii. Like DePauw, the Kanayamaya Schools sported one of the earliest, low-power, 10-watt radio stations in the country. During the school year, Turnell taught and learned from the students in Hawaii, while the advisor of radio at the Kanayamaya Schools, Robert Ritterhoff, served as the Program Director for WGRE. The exchange program proved beneficial for both schools and their radio programs. While Turnell was in residence in Hawaii, she recorded “Conversations” about her experience which aired on WGRE. These broadcasts were among the station’s most popular during the 1958-1959 school year. 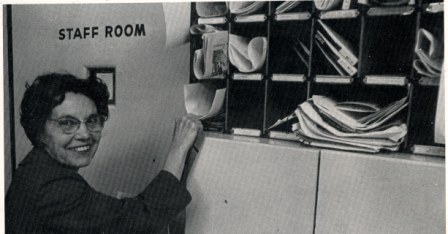 Just as the 1950s had proved valuable for the establishment of WGRE as a campus organization, the 1960s brought significant changes and improvements to WGRE. During the 1960-1961 school year, WGRE invested in an AP News line to the station that would provide listeners with more timely news. WGRE was prompted to do this when an editorial appeared in The DePauw which suggested WGRE needed the AP News line to best serve the community. The installation of the line proved to be a major improvement for a radio station which had been broadcasting for just over ten years. 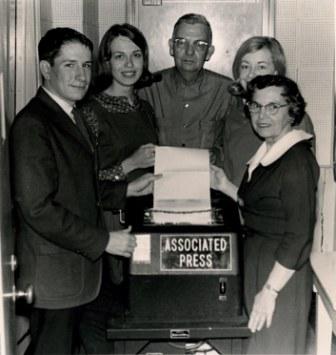 In the Fall of 1960, Dave Sublett, a member of DePauw’s electrical staff began serving as WGRE’s primary engineer and later during the same school year thepopular advisor of the radio program, Herold Ross, retired. Though Ross would remain a part of the University and a friend of WGRE for many more years, Turnell took charge of the bulk of operations responsibilities for the station. 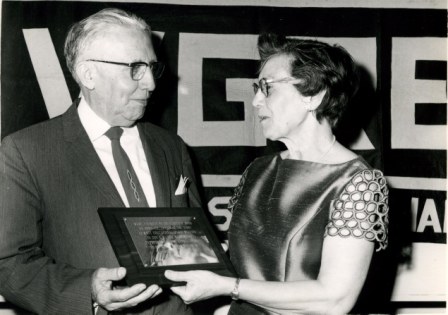 This responsibility became more significant in August of 1962 when WGRE expanded its broadcast capabilities to 250-watts. Previously transmitting at only 10-watts, the expanded signal changed WGRE’s broadcast radius from six to thirty-five miles, dramatically expanding the station’s listenership. WGRE broadcast a special program to dedicate this increase of power, and the frequency of the station changed from 91.7 to 91.5 on the radio dial. As a result of this increase in power, WGRE had to expand its programming and appeal to the larger Putnam County community, rather than simply the DePauw campus. 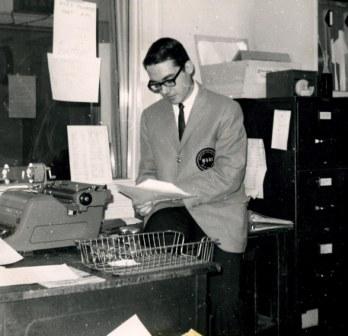 While WGRE had been broadcasting high school sporting events and granting time to high school students for some time, the expanded programming options afforded by the increase of power led to programs designed by all of the county schools and also programming to appeal to the older members of the community as well. Many of the efforts WGRE undertakes for the Greencastle community today are a result of this expanded power in 1962. As the expanded power began to transmit to the Putnam County area, the WGRE staff grew to over fifty students who broadcast eight hours each day on Monday through Saturday, and four hours on Sunday. 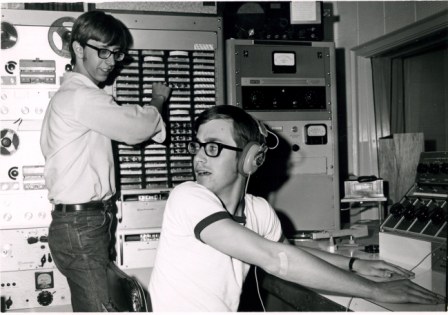 While the late sixties were a time of upheaval across the country, WGRE found itself emerging as one of the better college radio stations in the country. In 1966, aided by WGRE participant Madeleine Arnheim and her father Larry Wood, an official with General Electric (and also a DePauw graduate), the station received a free General Electric control panel which facilitated station renovations during the 1966-1967 school year. The newly renovated studios in the Union Building created more, smaller studios, interview studios and news booths which were needed as the station’s operations changed. This renovation marked the end of audience shows for WGRE and marked a transformation to a new age of radio - one which was adapting to the competition posed by television. Consequentially, 1966 also marked the end of WGRE’s 17-year run as Putnam County’s only radio station when the county’s first local commercial station opened. This did not change WGRE’s priorities, however, and the station continued broadcasting for the benefit of the entire community. 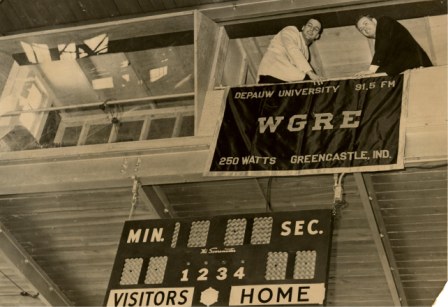 In 1967, WGRE received the first of many national accolades it would receive throughout its history. In February, College Radio magazine named WGRE “Station of the Month” and a large article featuring DePauw’s radio station appeared in the magazine. It was tremendous honor for WGRE, and occurred as WGRE approached the end of its second decade broadcasting. On April 24th, 1969, Greencastle Mayor Norman Peabody declared the day “WGRE Day” throughout the city on occasion of its twentieth anniversary. The station was featured in DePauw’s Alumnus magazine that Spring as alumni from WGRE’s first twenty years of broadcasting reminisced about its history. 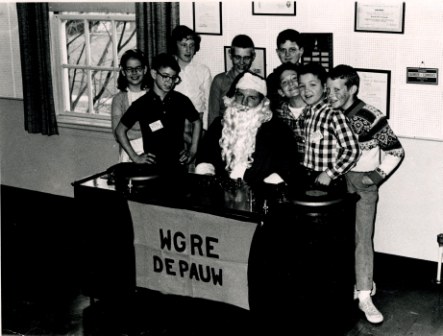 While WGRE emerged as an important part of the DePauw community during this two-decade span, the station was not content to rest on its laurels. In 1970 members of the DePauw and Greencastle communities attended a symposium to discuss the future of WGRE, and the role it should play in coming decades. Just as relocation to new studios in the Union Building ushered in a new era of radio on DePauw’s campus in 1951, the retirement of beloved advisor Elizabeth Turnell in June of 1971 created a similar moment for WGRE. Turnell’s contributions to DePauw and WGRE proved invaluable, and it was due in large part to her efforts that WGRE began the 1970s poised for a successful future. 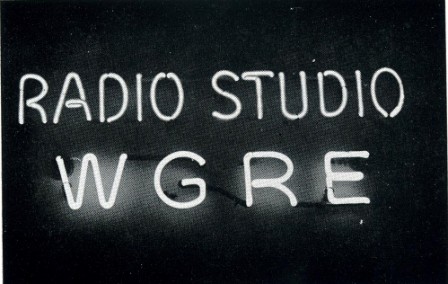