While WGRE has served DePauw and the Greencastle community since 1949, radio has been a part of DePauw’s campus since 1928 when occasional remote broadcasts were conducted for Indianapolis radio stations. In 1941, thanks to the support of DePauw Alumnus Eugene C. Pulliam (1910), radio station WIRE in Indianapolis began broadcasting programs from a fully equipped studio in Harrison Hall. Pulliam, President of WIRE, provided nearly $15,000 worth of services to DePauw during the first year of the radio program on campus. Dr. Paul J. Fay, Professor of Psychology, was named the first director of radio for the campus because the studio was located on the Psychology floor of Harrison Hall. The agreement between WIRE and DePauw was not unique, as WIRE and Indiana University in Bloomington had a similar arrangement to put student broadcasts on WIRE’s airwaves. 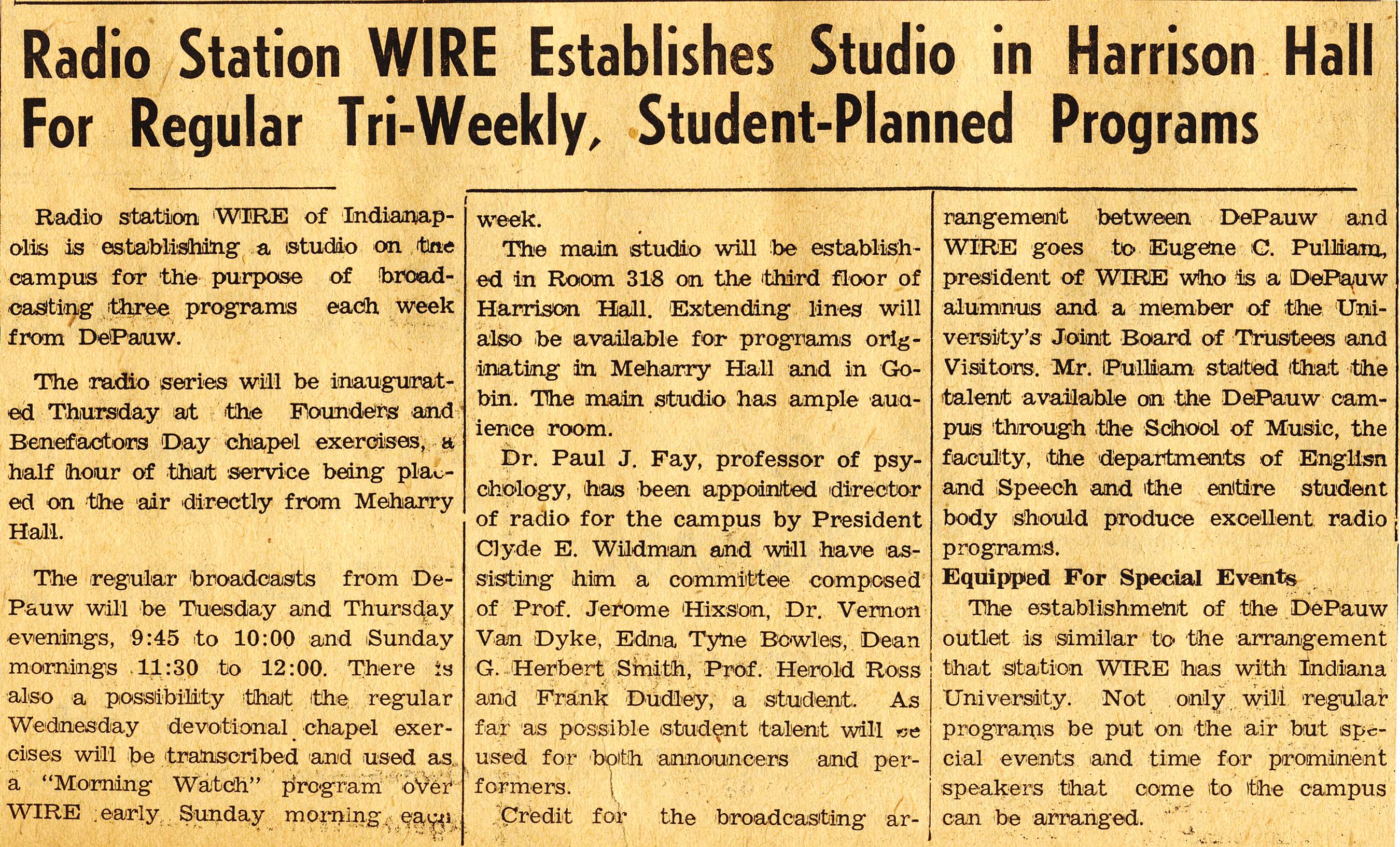 Under the direction of Prof. Fay, broadcasts originated from DePauw three times each week and were broadcast over WIRE for fifteen minutes on Tuesdays at 4:45 P.M., Thursdays at 10:15 P.M. and Sundays at 7:30 A.M. A project of the entire campus, broadcasts were often related to significant events taking place at DePauw including the dedication of Blackstock Stadium, play-by-play of the Old Gold Day football game and alumni events.  The original studio in 318 Harrison Hall allowed for a live audience of one hundred people to listen to broadcasts. For its popular Saturday afternoon broadcasts, the studio was often at capacity. 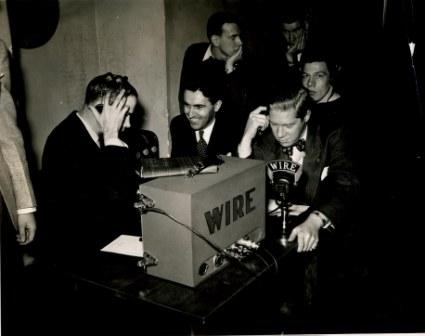 In December of 1941, the early highlight of the radio program at DePauw was a broadcast of Handel’s “Messiah” which was heard across the country through a simulcast provided y NBC. Despite its early success, however, interest in radio across campus was limited during its early years, particularly since evening programs could not be heard in the Greencastle area. Nevertheless, radio broadcasts were one campus activity which was seemingly unaffected by the outbreak of World War II. As DePauw’s broadcasts became well known to listeners in central Indiana, the student radio guild grew in popularity. In 1944 a new series, “Our Navy’s Men”, profiled the Navy V-12 unit on campus and their experiences during active duty. 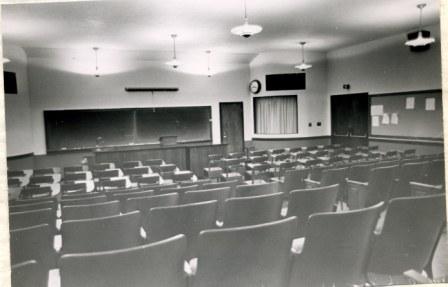 In 1948, Dr. Herold Ross, the Director of the Radio Program, applied to the FCC for a license which would allow DePauw to organize a 10-watt FM radio station on campus. Modeled after a low-power station on the campus of Syracuse University, Dr. Ross and the radio guild were granted their request for an FCC license on November 22nd, 1948. DePauw became the only 10-watt educational broadcasting station in the country and tentatively adopted the call letters WDPW-FM and frequency of 88.1, though in November of 1949 the call letters and frequency changed to WGRE 91.7 FM. Consequentially, the call letters GRE were issued to the station because they were the first three letters of “Greencastle.” A transmitter was installed at Harrison Hall and broadcasts began from the original radio guild studios on April 28th, 1949. The opening program featured remarks from Greencastle's mayor, Harold W. Stewart and Dr. Ross. 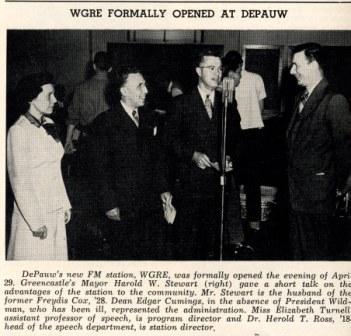 To help direct the station, Prof. Elizabeth Turnell, who had begun working for the university in 1946, was hired as the Program Director to assist Dr. Ross after DePauw received an FCC license. WDPW also had direct broadcast lines installed in a variety of buildings across campus including Bowman Gym, Meharry Hall of East College, Blackstock and the baseball field, as well as Gobin Methodist church and the Greencastle High School gym. 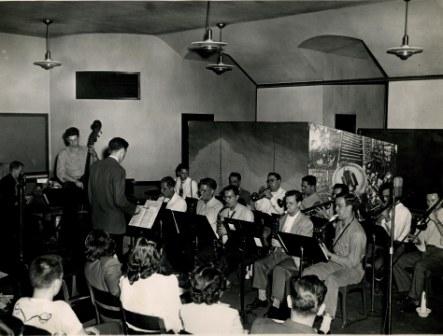 Initially, the station broadcast only four hours each day and broadcasts for the Indianapolis station WIRE continued. On April 28th, 1949 to celebrate the formal opening of WDPW (WGRE), a special program was presented across the new airwaves. Speeches were made by Dr. Ross, Deal Edgar C. Cummings, Greencastle Mayor Harold W. Stewart and Elizabeth J. Turnell. There were a variety of musical presentations including a performance by the studio orchestra and also a fifteen minute dramatic presentation. Throughout the first few years of the station, WGRE broadcast a limited schedule and its programming offerings were printed regularly in the campus newspaper, The DePauw. WGRE offered music broadcasts, women’s shows, high school programs, dramatic presentations, news and sports programs, interviews, discussions and broadcasts of sporting events on a regular basis for local listeners. 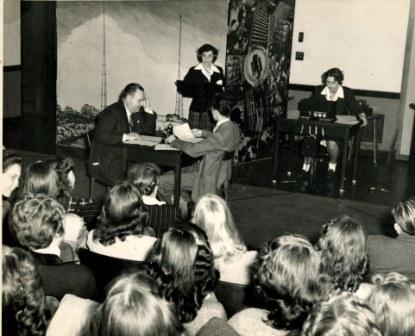 Just as DePauw celebrated ten years of radio on its campus in the spring of 1951, WGRE relocated to new studios in the recently completed Student Union Building and began broadcasting their in the 1951-1952 school year. The new facility offered more studios for rehearsals and broadcasting as the program grew, ushering in a new era of radio on DePauw’s campus.