Dr. Percy Julian was an outstanding organic chemist, humanist, and educator. This guide outlines his life and accomplishments. 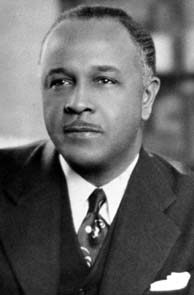 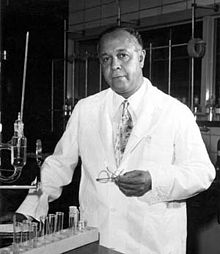 Percy Lavon Julian ’20 was born on April 11, 1899 in Birmingham, Ala., one of six children. His father, James Sumner Julian, a railroad mail clerk, and his mother, Elizabeth Lena Adams, a school teacher stressed education to their children.

Percy attended elementary school in Birmingham and moved on to Montgomery, Alabama where he attended high school at the State Normal School for Negroes. Upon graduation in 1916, Julian applied to and was accepted into DePauw University in Greencastle, Indiana. At DePauw, he began as a probationary student, having to take higher level high school classes along with his freshman and sophomore course load. He proved himself well, going on to be named a member of the Sigma Xi honorary society as well as a Phi Beta Kappa member. Finally, upon graduation from DePauw in 1920, he was selected as the class valedictorian. Though at the top of his class, he was discouraged from seeking admission into graduate school because of potential racial sentiment on the part of future coworkers and employers. Instead, he took the advice of an advisor and took a position as a chemistry teacher at Fisk University, a Black college in Nashville, Tennessee. After two years at Fisk, Julian was awarded the Austin Fellowship in Chemistry and moved to the distinguished Harvard University in Cambridge, Massachusetts. Finally given an opportunity at graduate level work, Julian excelled. He achieved straight A's, finishing at the top of his class and receiving a Masters Degree in 1923. Even with this success, Julian was unable to obtain a position as a teaching assistant at any major universities because of the perception that white students would refuse to learn under a black instructor. Thus, he moved on to a teaching position at West Virginia State College for Negroes, though he would not find happiness in this situation. He left West Virginia and served as an associate professor of chemistry at Howard University in Washington, D.C. for two years.

In 1929, Julian received a Fellowship from the General Education Board and traveled to Vienna, Austria in pursuit of a Ph.D. degree. While in Vienna, Julian developed a fascination with the soybean and its interesting properties and capabilities. Focusing on organic chemistry, Julian received his Ph.D. in 1931 and returned to the United States and to Howard University as the head of the school's chemistry department (http://www.chem.howard.edu/). He soon left Howard and moved back to DePauw where he was appointed a Research Fellow in Chemistry. At DePauw, he worked with an associate of his from Vienna, Dr. Josef Pikl, on the synthesis of physostigmine, a drug which was used as a treatment for glaucoma. After much work and adversity, Julian was successful and became internationally hailed for his achievement. In late 1935, Percy Julian decided to leave the world of academics and entered the corporate world by accepting a position with the Glidden Company as chief chemist and the Director of the Soya Product Division. This was a significant development as he was the first black scientist hired for such a position. The Glidden Company was a leading manufacturer of paint and varnish and was counting on Julian to develop compounds from soy based products which could be used to make paints and other products. Julian did not disappoint, coming up with products such as aerofoam which worked as a flame retardant and was used by the United States Navy and saved the lives of countless sailors during World War II.

On December 24, 1935, Percy married Anna Johnson and they settled into their comfortable life in Chicago. Percy continued his success as he next developed a way to inexpensively develop male and female hormones from soy beans. These hormones would help to prevent miscarriages in pregnant women and would be used to fight cancer and other ailments. He next set out to provide a synthetic version of cortisone, a product which greatly relieved the pain of sufferers of rheumatoid arthritis. The real cortisone was extremely expensive and only rich people could afford it. With Julian’s discovery of the soy based substitute, millions of sufferers around the world found relief at a reasonable price. So significant was his work that in 1950 the City of Chicago named him Chicagoan of the Year. While the honor should have signaled Julian's acceptance by his white counterparts in his field and his community, but when he soon after purchased a home for his family in nearby Oak Park, the home was set afire by an arsonist on Thanksgiving day 1950. A year later, dynamite was thrown from a passing car and exploded outside the bedroom window of Percy's children. Despite the fact that many residents of the town relied upon his methods to relieve their pains of and provide for their safety, some still would not accept him because of his race. 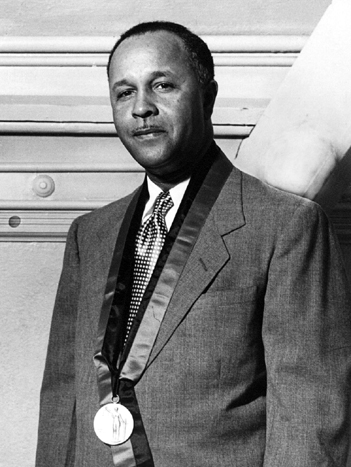 In 1954, Julian left the Glidden Company to establish Julian Laboratories which specialized in producing his synthetic cortisone. When he discovered that wild yams in Mexico were even more effective than Soya beans for some of his products, he opened the Laboratorios Julian de Mexico in Mexico City, Mexico which cultivated the yams and shipped them to Oak Park for refinement. In 1961 he sold the Oak Park plant to Smith, Kline and French, a giant pharmaceutical company and received a sum of 2.3 million dollars.

After years of struggling for respect in his field and his community, Julian finally was recognized as a genius and a pioneer. He received countless awards and honors including the prestigious Spingarn Medal from the NAACP and was asked to serve on numerous commissions and advisory boards. He received fifteen honorary degrees as well as authoring and co-authoring more than 160 publications. He was trustee of five universities, including DePauw. Percy Julian died in 1975 of liver cancer in Waukegan, Ill.

The Google Doodle for April 11, 2014 honors Percy L Julian on the occasion of his 115th birthday.